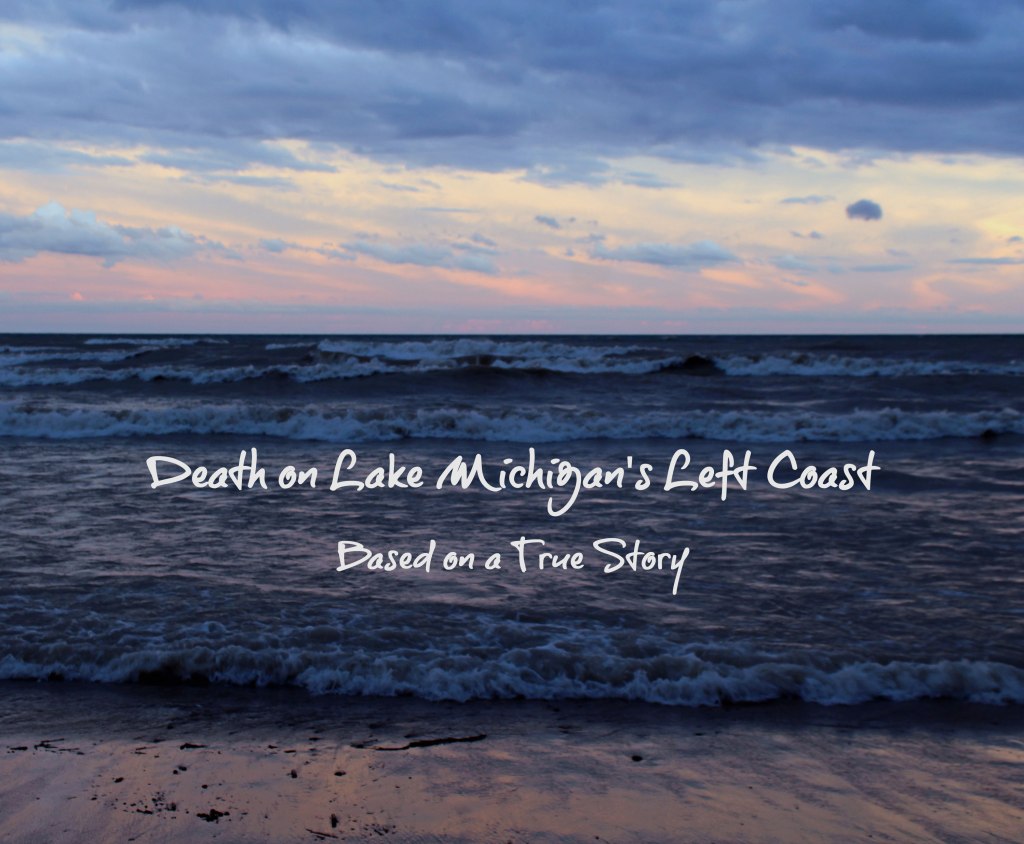 Among the Great Lakes, Lake Michigan is unique for its north-south configuration. In summer, southwesterly winds create invisible currents running parallel to sandy beaches that line the western shore. Called rip tides, these currents can quickly overwhelm the strongest swimmers. Before unsuspecting bathers realize they are caught in a rip tide, they can be carried far from shore.
Every year more people drown in Lake Michigan than in all the other Great Lakes combined. Death on Lake Michigan’s Left Coast is based on a true story.

A Wisconsin state park is popular for its forested camping spots, for its fish-stocked quarry, and mostly for its sandy Lake Michigan shoreline. Milwaukee is a half-hour drive from the park—Chicago, 2 hours. In summer, vacationers here enjoy the beach, the hiking trails, the nights around a campfire.

On a Friday in mid–August, five Chicagoans headed to the park for a three-day weekend. All in their early thirties, they sought escape from the stresses of dating and early careers. They had planned the trip on Memorial Day, when two of the five had announced their intent to marry.

The campers provisioned themselves with cheese curds and Spotted Cow at Mars Cheese Castle. They continued north on I-43. At last encountering well-tended farms with corn and cows, they recognized the Wisconsin of fond memories. At the park’s exit, they cooed and pointed at rustic dwellings and locals.

Upon entering the park, they paid their fees, located their campsite, and pulled out their phones. They were surprised to find their calls dropping. All they could do was text, sort of. “Hey, I think we’re actually in a ‘cellular dead zone,'” one of them called out with air quotes. “Yah, no electricity to charge either,” another one noted, staring blankly at his unresponsive iPhone. One by one, they pocketed their phones.

They set up fresh tents, blew up new air mattresses, and unrolled barely used sleeping bags. They snacked on curds and popped the first of the Spotted Cows. They unpacked the makings of morning coffee over an open fire. Then they looked at one another, wondering what to do next.

“To the beach!” came the rallying cry. In Chicago, the five frequented the splendid city beaches situated safely inside harbors and breakwaters. On summer nights, Zamboni-like machines rumbled back and forth to rid the imported sand of debris.

As the campers ducked into tents to don bathing suits and mosquito repellent, they anticipated an utterly familiar Lake Michigan. As Lake Michigan’s Left Coast slipped into twilight, they drank, dined, and dug toes into the bliss of sun-warmed sand.

Saturday and Sunday were the most glorious days of summer. Under cloudless skies, Lake Michigan appeared to the campers as rippled glass. Strong swimmers all, they raced one another in the cool, fresh water. They lounged in beach chairs, rubbed on SPFs, and felt just fine in the blazing August sun. On Saturday night, they passed around a bottle of Kentucky’s finest and, next to smoldering logs, danced to the car radio.

On Sunday night, they lingered as Lake Michigan lapped gently at their ankles. They had fallen under the spell of the summer-warm water and believed it to be tame, even welcoming. The decision to postpone their departure until Monday afternoon was unanimous. They tumbled into tents to dream of another day of heaven at a Great Lake beach.

Anyone familiar with the Great Lakes climate knows the weather can change quickly and dramatically. Monday morning arrived with stiff winds off the Lake. The campers’ plan was to pack up, hop in the car in beach clothes, and arrive in Chicago around sunset. As they loaded the trunk, the five noticed enormous white cumulus clouds low in the sky, shuffling rapidly to the west.

At the beach, the cool lake breeze was welcome against the weekend’s sunburns. The campers downed the last Spotted Cows and splashed at the shoreline. When the wind built velocity and began blowing from the northeast, they donned hoodies and huddled on damp beach towels.

As the waves kicked up, one of the five noticed a spot where the water was oddly flat. It was eddying, sand appearing intermittently. “A sandbar! Let’s go out there!” shouted the camper over the wind and ever-louder waves. The other four peered from under their hoods and they too spotted a sandbar not far from shore.

The five friends shed their hoodies and dashed into Lake Michigan. Fifteen feet from the beach, the sandy bottom disappeared, and under their feet the water was cold, oh so cold. Defiantly they swam through the oncoming waves until their feet hit gravelly sand. They clambered up the sandbar and stood out of breath and shivering at its highest point.

Above their heads the scattered clouds were low and partly gray, but in between, the mid-August sun still warmed them. They looked out at Lake Michigan—its shades of azure and sapphire now broken by shreds of frothy white—and were silent. There was nothing between them and the endless midnight deep. They faced the untamed majesty of a Great Lake in the wild.

One camper turned around and gasped. The others turned and saw they were farther from the beach than they thought. Massive waves rolled toward shore, crashing violently on the beach where they left their hoodies. “Like an ocean,” one of them uttered, her words lost in the din of wind and waves. They looked at one another, now a little intimidated by Lake Michigan. Rested but cold, they waded off the sandbar for the 20-yard swim to shore.

Sometimes the most momentous consequences result from the most trivial decisions. Like swimming to a sandbar in Lake Michigan to prolong a long summer weekend. The campers had heard of the Lake’s stealthy currents, but they had reached the sandbar OK. They had heard of rip tides but did not know the overpowering currents frequently occur around sandbars. Between the sandbar and the beach, the campers became separated. Individually they learned that Lake Michigan is unforgiving. It gives an unsuspecting swimmer only one chance.

Within moments of one another, three campers dragged themselves onto the beach. Wide-eyed with fear from battling a rip tide, they scanned the surf for their two companions. They yelled above the roaring waves and peered into rolling white caps. There was no sign of either one. They dashed to yank phones from their gear. Their frantic calls to 911 dropped, and they remembered they were in a dead zone.

At the south end of the park, a man walking his dog spotted a limp woman in shallow water and pulled her to shore. His calls to 911 also dropped. He witnessed the fourth camper’s last breath right there on the beach. The fifth camper was the man to whom she was engaged. Two weeks later, his body was spotted floating in Lake Michigan 120 miles to the north.